The End of the Rainbow Apple? 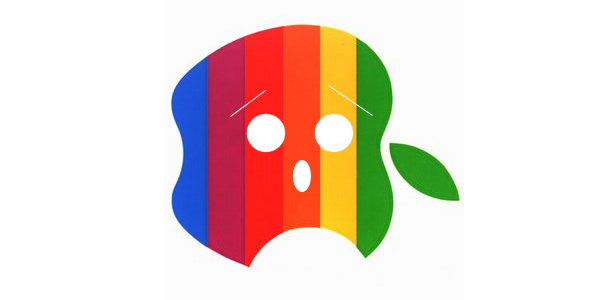 An Apple a Day?

This morning I did a horrible thing: I used a PC to do some creative. I know, I know…but in my defense, the hard drive on my beloved G5 tower clickety-clacked into a coma the other day, and though I did throw in a spare internal (which took about 5 minutes), the older Open Office (it’s less than annoying than Word, and free) version I dug up to install didn’t want to play nice with the newer files, so there I went to the PC – when you gotta write, you gotta write and all that.

Was the PC (it runs Vista) as good as the Mac? Not as good as the old PPC, but in terms of interruptions to workflow, sadly, about on par with the shiny new iMac i7 I use at the office.

Now, I know that that’s blasphemy as far as any long term mac user is concerned, but to be honest, I’ve got a sneaking suspicion that mainstream success and the drive to keep outdoing its previous quarter has, despite it’s massive cash balance, begun to take the shine off of my once beloved Apple.

Here’s the backstory: My first computer was a TRS80, my second an Epson (with an Amber screen!), and my third an Apple IIC (with the green screen). Back then, as today, I used them primarily to write (I even took the IIC to my first newspaper job – only computer in the office – what a rebel I was…). But then in the early 90’s, I started looking at these elegant things called Macs – there was something different about the way they worked – about the way they ‘felt’ when you used them. They were solid, elegant, even the tactile feel of the mouse and keyboard made you want to remain engaged – clicks and taps dispensed a geeky rush every time, and when I went back to PC-land, I felt like I was playing with a cheap toy.

Still, when push came to shove, I went out and bought a store-built PC just when Windows 95 was coming out. Why not? it was cheaper, and the interface Mac-like.

Sadly, that machine lasted about a week before crapping out and, rather than get it repaired by the folks who assembled it, I just took my money and plunked it down on a Performa 6400 series running Mac OS 7.5. And never looked back.

It was by no means a coincidence that I started learning about the then-field of ‘desktop publishing’ – I loved working on my Mac – it didn’t feel like work even – and it eventually led me into my profession. I eventually moved to a G3 ‘Wallstreet’, G4, then a G5 as needed, but all the time feeling secure that these things would last – I wouldn’t have to deal with forced upgrades and, if necessary, even a non-techie like myself felt completely comfortable cracking open the case and swapping out whatever piece of hardware I needed to in order to keep working, just like with the G5.

In my business, most of us work on Macs, and for the past few years, we’ve noticed that our once-beloved machines are, more and more, being relegated to the home office, largely because Apple seems to have adopted a policy of continual upgrades that are not backwards-compatible. Or, quite frankly, necessary.

But their audience is no longer the happy, professional/hobbyist that we all were. Their ‘community’ is now just another consumer-driven cattle segment that likes – and then discards in favor of newer and shinier – their Apple products. When you go to an Apple store, sure they’re packed, but it’s a different packed – consumers jostling one another out of the way in order to be the first to buy the newest and shiniest bauble. Which is a far cry from the days when I’d go out of my way to drive to the nearest Comp USA and spend hours in that dry little corner where the Apple products were kept with a dozen like-minded fans just discussing the machines and whatever workarounds and modifications we could come up with.

The giant ‘pro’ iMac on my desk runs hotter than a furnace, drags like a dog in InDesign, and has a host of minor day-to-day annoyances that make me periodically check to make sure that there’s no Start button in the corner of my screen. Granted, I chose not to get a tower this time (bad move), but there’s no way in hell that I’ll ever crack this thing open if, and when, it craps out. And I think that that’s the plan now at Apple: obsolescence.

It’s probably a good temporary move for Apple; just this morning their market cap exceeded Microsoft’s ’99 peak, making them the biggest public company in history. But I think that when you start to cast the widest possible net for the sole sake of profit, even if successful, being all things to all people never works for the long haul.

You see, I no longer love Apple and their products. Or even much like it. And that’s truly the problem, in and of itself.

I didn’t actually write this to be a bitch session, so let me bring it around full circle from a branding and marketing standpoint: when your customers aren’t passionate about your product, when they’re not truly connected to it, then you’re probably not as strong as your balance sheet seems to indicate.

Grooming a client base to continually consume via upgrade, even if it’s a large as Apple’s, does not guarantee long-term success. If anything, you’re actually building on a weak foundation by encouraging a transitory approach to your consumer’s feelings toward your product: eventually they know they’ll have to upgrade, so they don’t truly become emotionally invested in the product.

Which leaves an opening for your competitors (Samsung anyone?) to pull them away for a round of upgrades. And maybe, just maybe keep them for good.

Was today a high-water mark day for Apple? The folks at CNBC were breathless, but maybe Apple should pause and take stock (pun intended): Microsoft once rode this high as well.